Dynamic, dyadic coevolution deepens as newer technological innovations manifest, posing a key question, what does it mean to be ‘Chinese in a digital age?

China’s socioeconomic transition from 1978 onwards has expedited technological development, but the resulting changes in the prevailing digital infrastructure must contend with existing cultural traditions. Emerging online behaviours are being constantly shaped and reshaped by increasing digitalisation in a self-reinforcing cycle. The bi-directionality of development between technological adoption and cultural traditions is evidenced in the dyadic interactions between individuals subservient to the rise of social media networks. Online communication revolutionised bilateral interactions, yet imbued cultural notions of guanxi (关系) remain key to social capital accumulation in China. In short, technological interactions reveal societal structure, but the underlying infrastructure is endogenous to pre-existing values. As such, I argue that, by exposing relevant dualities, technology does not break with tradition but rather fosters a new expression of oxymoronic ‘modern tradition,’ in which there exists congruence between culturally-imbued behaviours and their technological manifestation.

The Digitalisation of Dyadic Communication: Guanxi in Social Media Networks

McLuhan (1994) first theorised the fundamental role of media in changing and conditioning social interactions. While his affirmation that “the medium is the message” holds true, the directionality of media’s decisive role is less clear. The traditional ‘Uses and Gratification’ perspective views users as active, discerning, and motivated in selecting media to satisfy individual needs, but is limited by its ignorance of distinct cultural traits in defining such needs. More recent convincing arguments propose that changes in social context drive technological development (Race 2015), dispelling previous convictions of technological determinism. In support, examination of website aesthetic forms and design philosophies reveals lessons about the larger social order: that technologies proven to operate efficiently within one culture fail in the context of others if they cannot provide a sufficient apparatus for social interaction (Miller 2000).

Yet culture itself is a complex notion, lacking a single standardized definition across the existing literature. At a higher level, culture underpins the values imbued in society (Anderson and Lee 2008), governing an individual’s identity, actions, and relations. The overarching concept of guanxi in China is derived from culturally-based elements such as kinship ties, local traditions, and social norms reinforced by a moral system guided by Confucianism (Fei 1947; Hwang 1987; Yan 1996). The value of guanxi lies in the strength of particularistic ties and the principle of reciprocity for the exchange of gifts, favours, and trust (Lee and Dawes 2006; Qian et al., 2007). Such interpersonal relations beyond blood and kinship are built through careful balancing of emotional and instrumental components (Chen et al., 2013). Guanxi consists of three more component social mechanisms: (1) guanqing（管情）, or guarantees underpinning strength of network ties (Gold and Guthrie 2002); (2) mianzi（面子）, synonymous to social status and self-image portrayal (Wang 2016); and (3) renqing（人情）, reflecting relational effort to obtain mutual benefits (Wang 2007).  Each of these cultural behaviours are represented in online interaction in China, and the cultural appropriateness of behaviour therein drives the acceptance of technological features  in turn.

WeChat is the primary social media platform for formation of dyadic interactions between Chinese netizens (CINIC 2015). Features of low anonymity, high privacy, and closed sharing circles are harmonious with expressions of guanxi through a network of personal connections (Yan 1996). The dominant and distinctive features of Chinese social media technologies transcend cultural constructs, allowing for the maintenance of traditional social structures. The private networking opportunities on the platform recreates the exclusive circle of in-group favourites entitled to social resources such as business favours, heightened trust, and mutually beneficial cooperation. These networks are further strengthened by instant messaging, which allows WeChat users to build good guanqing by creating and maintaining guanxi with only those they deem important. Online ties align with real world connections, with only 10% of WeChat users open to stranger interactions (Chun 2014).  Digital content can be used to promote positive self-image, with online branding as a means to the end goal of accumulating mianzi. Renqing becomes more convenient to accrue, with the new ability to send an electronic hongbao (红包 , red bag) in an instant. The commonalities of successful Chinese technological developments, whether it be the popularity of closed social networks, adoption of diffusion-restricted content exposure, or modernised gift-exchange, are demonstrative of how technology evolves to interface with cultural constructs.

The replication of traditional behaviours into modern mediums in the Chinese context is perhaps best exemplified by electronic hongbaos. First introduced to welcome the 2014 Chinese New Year and honour the tradition of sending money as a form of blessing, hongbaos drew over 8 million users with transactions totalling 400 million yuan in sum within just nine days. This intensity of social interaction during cultural events is an extraordinary phenomenon, even being accredited as distinctly unique to China (Holmes et al., 2015). Furthermore, this technological reinvention of an ancient custom is a display of traditional collectivist values of Chinese society re-emerging in digital form. Cultures are considered collectivist if the society possesses a consistency of world view (Oyserman et al., 2002) where common adherence is applied to interpersonal relationships, reciprocity, and social norms (Hempet et al., 2009; Somech et al., 2008; Pheng and Leong 2001).  Holmes et al., (2015) see social media as a tenable modern method to link such a large but highly collectivist society as China’s. Crucially, these modern hongbaos demonstrate that digital technologies are not individualistic, nor with meaningless functionality or merely technological by nature. Rather, technological development can reinvent traditional forms of cultural behaviours, but does ignore others in the process. While instantaneous and geographically unconstrained hongbaos favour modern expression of guanxi, digitalisation introduces distance between present family members, disturbing notions of filial piety. Lee (2017), using interviews of older generation attendees at a wedding, reports that some Chinese elders disagreed with guests congratulating the bride by scanning a QR code, citing the impersonal nature of gift-giving via mobile payments. In lacking face-to-face exchange, the packages do not constitute perfect substitutes for traditional cultural practice. Nonetheless, both a hongbao and a direct money transfer offer the same financial and technical functionality. As China transitions towards a cashless economy, all types of digital payments are on the rise with the People’s Bank of China reporting record $17 trillion in 2017. Yet, the cultural significance of the hongbao is revealed by breaking down the timing of usage data. There exists an annual regularity of digital payment spikes during festivals, driven specifically by hongbaos with more than 14.2 billion gifted on WeChat for Lunar New Year’s Eve alone in 2017 (Yuan et al., 2017). Thus, while a direct transfer and a hongbao may share functionally, the former is still designated appropriate behaviour at weddings and festivals, while the latter only occupies a transactional function. ­­­

Tensions between resilient cultural influences and technological change are discussed by Anderson and Lee (2008), who question whether cultural attitudes towards business remain tradition-bound or face convergence to Western standards of internet-individual interaction. Davidson (2008) offers a more precise narrative detailing the diminishing importance of guanxi in lieu of effective online intermediaries able to re-contextualise explicit knowledge sharing: by connecting businesses directly, intermediaries like those provided by Alibaba threaten the relevance of traditional guanxi based social networks. Some commentators argue that guanxi connections arose precisely to deal with China’s information-scarce environment plagued by severe asymmetries (Akerlof 1970; Stigler 1961). In order to survive, they assert, businesses forge new ties to mitigate uncertainty in the process of knowledge exchange (Powell et al., 1996). The need for particularistic ties is further strengthened in the competition for resource allocation. During China’s transitional Opening and Reform period, the greater transparency of information offered by internet intermediaries and reduction in physical resources required to build connections had a profound impact on network behaviour (Chang 2011). With over 800 million netizens (CNNIC 2018), China’s online community presents remarkable opportunities for network expansion. Niedermeier (2016) reveals that WeChat interactions are used to expand sales by offering a more tailored personal connection from seller to buyer, an example of technology aligning to and enhancing elements of traditional guanxi formation. While a more extensive digital infrastructure represents change in the institutional environment, this does not restrict actors to abandoning previous networking strategies. Instead, the same central tenants of guanxi remain but with different means applied to reach the same end.

The permanence of cultural tendencies in digital networks relies on persistency of purpose and message, despite structural breaks in the method of forming connections. Crucially, the blending of old and new in the rise of certain technologies and decline of other cultural behaviours demonstrates the coevolution of technology and culture in China’s transition to modernity. Social interactions reflect traditional guanxi ideals of interpersonal influence and connectedness, but the contextual nature of dyadic interactions has transformed to keep pace with a new generation of internet users with new desires, behaviours, and norms.

Technological development inflicts change at a pace incomparable to previous innovations. In a society contending with change which is continuous, not episodic, Chinese culture faces considerable pressure to conform to technological determinism. Yet, it is naïve to ignore the extent to which culture itself is deterministic, rendering the process endogenous. Culture drives digital desires as social discourse shapes internet expression, working to mould the digital infrastructure around a pre-existing framework. Upon documenting the complex coevolution of the internet and society, it becomes apparent that the underlying, culturally-specific yet dynamic tenets of tradition manifest in technology during China’s post-reform transition to modernity.

‘All Under a Warming Atmosphere’ : What Chinese Ancient Philosophy Can Teach Us About Collective Climate Change Policy’ 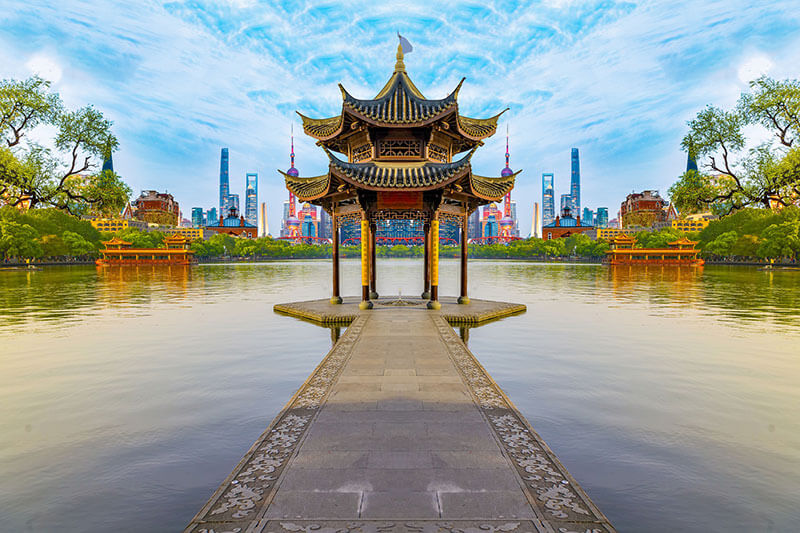 China
‘All Under a Warming Atmosphere’ : What Chinese Ancient Philosophy Can Teach Us About Collective Climate Change Policy’